Police Use Cherry Picker To Arrest Protestors In Utah 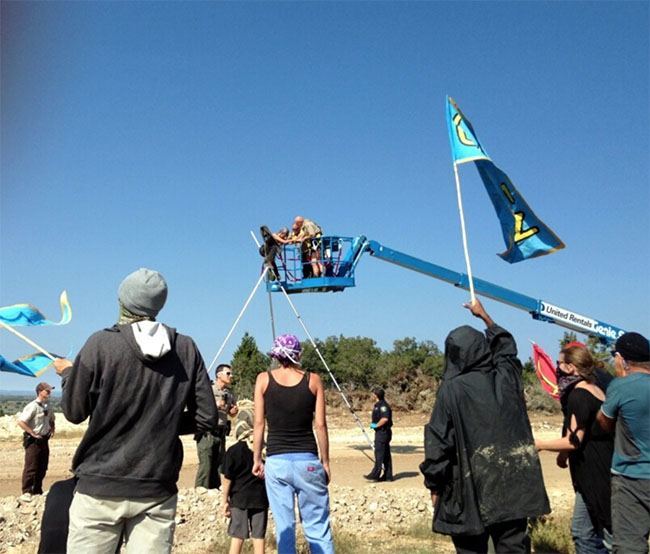 Dozens of environmental activists have signaled that the expansion of the tar sands in Utah will not happen without a fight.

Yesterday, about 40 protestors disrupted the work on the Utah tar sands strip mine, the first to be built in the U.S., located in the Book Cliffs wilderness area.

The company is starting an $80 million construction phase to start to strip mine tar sands rock and turn it into fuel.

The company operates on land traditionally inhabited by the Ute people, which is now managed and leased to private corporations by the state of Utah.

By the end of yesterday, four people had been arrested by police using cherry pickers to evict them. At one stage yesterday, though, the cherry picker itself had to stop work as one activist locked on to the vehicle itself.

All the activists arrested were bailed out by late yesterday.

Melanie Martin from the group behind the protest, Peaceful Uprising, told the local media that they wanted to avoid the wanton destruction of Utah as had happened with the tar sands in Alberta.

“Looking at what’s happening downstream to the Indigenous people in the Athabasca region of Canada has had a major impact on propelling this campaign forward,” she said. “Many people in Utah are very afraid of that happening here and of the impacts it would have on the Colorado river.”

The protest comes as the dangers of mining were reflected recently in the area when one million gallons of wastewater containing lead, arsenic and cadmiumleaked into the Animas River in nearby Colorado from a long-abandoned gold mine, turning the river bright mustard yellow for several days.

The response from the tar sands company to yesterday’s protest was farcical, with the CEO of the tar sands mine—Cameron Todd—saying “We’re the environmentalists. We’re the people that are here looking for a sustainable future.”

Todd though was disappointed that no one believes him and the protests are set to continue.

Peaceful Uprising is planning more vigils as well as an action camp.