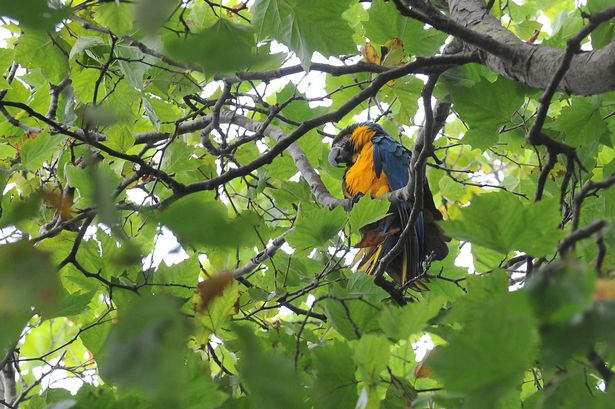 Family spend £300 hiring a crane to rescue Topaz the parrot who flew into a tree and refused to come down.

A family spent £300 to hire a cherry-picker crane – to rescue their pet parrot from a tree.

Stubborn pet parrot Topaz refused to come down from the 50ft tree after winging it out of his cage.

After three days on his makeshift perch in the tree, his owner Zahra Latif, 23, was hired the cherry-picker hydraulic platform to get her flyaway pet back.

And Zahra went up into the air armed with grapes and bananas to lure Topaz, a 10-year-old macaw parrot, down from his treetop.

She said: “We had taken him out of his cage because the weather was nice, and we wanted to give him some fresh air.

“He was on my father’s arm but flew off into a big tree at the side of the garden.

“We called the RSPCA, but they wouldn’t come out. If he had been a cat I’m sure they would have.”

The cherry picker rolled in to their street in Uplands, Swansea, to lift Zahra up to the top of the tree where the native south American bird happily hopped onto her arm.

Zahra’s father Adnan decided they would hire a cherry picker to grab the blue and gold bird.

She said: “It was worth it. I love him and it is great to have him back.”