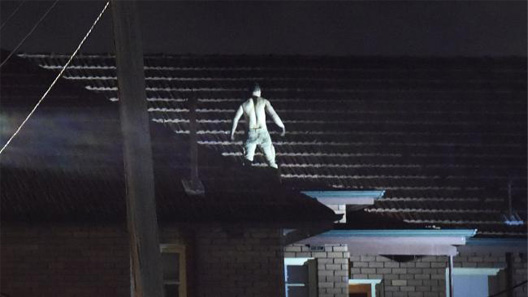 An argument over a minor road crash appears to have turned into an alleged brawl, then a full blown siege before climaxing with a bizarre rooftop standoff at Haberfield early Sunday morning.

It ended in dramatic fashion 10 hours later as one of the alleged brawlers, who threw tiles from the roof at police, was dragged — shirtless and with his pants around his ankles — into a paddy wagon by riot police just before 5am Saturday.

Three men from the apartment complex on the corner of Wattle and Ramsay Sts allegedly started fighting with five men from a passing Toyota ute and a second car at 8.30pm on Saturday.

A 33-year-old man was attacked with a knife and was treated in hospital for cuts to his hand and forehead.

When police responded to the alleged brawl several men allegedly fled inside a unit.

The last remaining man, 31, crawled through a manhole and onto the roof.

“They want to shoot me and I don’t even have a gun.”

The man appeared to try to end the situation several times, asking officers “how are we going to end this?” and also calling for a cherry picker.

But when firefighters arrived with a cherry picker about 2.30am he had a change of heart and screamed at police, “if you bring it over here I’ll jump”.

During the stand off police were forced to lock down the City West Link and multiple other streets in Haberfield, causing traffic chaos.

The man surrendered himself before 5am and was taken to hospital for medical treatment.

He remains at Concord Hospital, under police guard, due to an unrelated medical condition. Police said more charges would be laid.

One of the two men charged with affray Philip Camilli, 24, appeared in Parramatta Bail Court on Sunday and was refused bail to reappear on Wednesday. The 22-year-old was granted police bail to appear at Burwood Local Court on September 17.

By Robbie Patterson and Ben McClellan for The Daily Telegraph