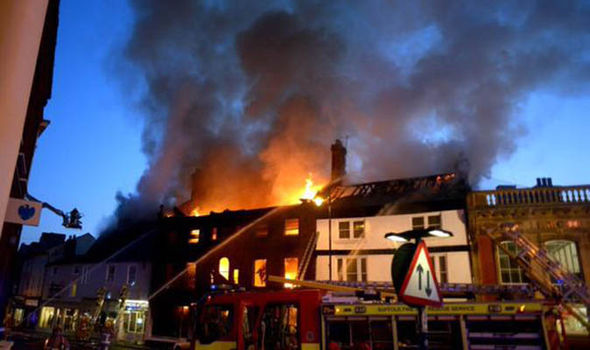 Firefighters were scrambling to rescue people from their burning flats tonight after an "apocalyptic" blaze broke out in a busy town centre.

Rescue teams had to be lifted up to the apartments in cherry pickers and courageously fought through the raging inferno to carry residents to safety.

Around 20 people narrowly escaped with their lives after the blaze ripped through a row of shops and flats in the centre of Sudbury, Suffolk.

Hundreds of people gathered in the streets of the quiet market town to watch the rescue effort, with many posting images on social media of the huge fire which engulfed several buildings.

Bystanders said they heard a loud explosion after the blaze broke out in a nail salon this evening and then quickly spread to the flats above.

Hundreds of people spilled on to the street below as flames ripped through the old building and thick, black smoke billowed into the sky.

Families, some with small children in tears, were evacuated from their homes and given blankets by ambulance crews.

Sarah Pheby, 28, an administrator whose flat is across the street, said: "The fire looks apocalyptic.

"I could feel the heat of the flames on my face when I looked at it through the window, and that was through my double glazing.

"The first floor of the building has collapsed, it is just a shell now. The roof has gone.

"It started in Celebrity Nails, which isn't a particularly big shop. Then there was an explosion and it just spread incredibly quickly."

She said firefighters in cherry pickers were sent up to people trapped in the flats above.

Around 15 fire engines and dozens of crew rushed to the town centre to tackle the blaze, which they have been battling for hours.

Police were called at 6.25pm to help and at 7pm a full evacuation of the area was launched.

Luke Cresswell, a teaching assistant and local councillor, said: "I saw around 20 people being evacuated. They were given covers and looked really upset.

"There were families including children. They looked really shaken up, some of them were crying. A couple of the young girls only looked around five or six years-old and were very upset.

"They were given blankets and taken to the side by an ambulance where they were being looked after."

Others were trapped inside a flat and had to be rescued.

Cllr Cresswell, 27, said: "You could see them come out with firemen and women.

"The fire is huge and proper black. I kept thinking it had died down but it flared up again. The fire is literally right in the middle of the town centre."

By Nick Gutteridge for Express