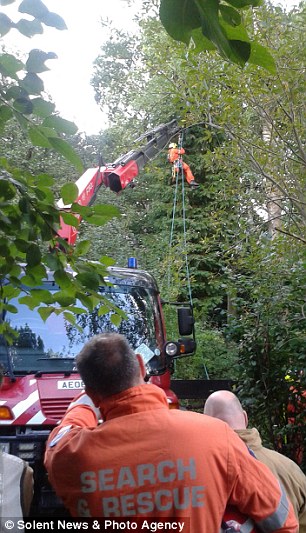 Boy, 13, gets stuck after climbing 50ft tree to rescue a cat and needs fire crew ladders, cherry picker and rope team to be rescued.

Firefighters had to be called out with a cherry picker and harness to rescue a schoolboy who had climbed a 50ft tree to rescue his neighbour's cat.

Bradley had climbed 40ft into the 50ft tree after hearing Tilly, who had been stuck in the branches for a day, meowing.

And when he was finally brought back down to the ground, the first thing the kind schoolboy asked was the pet's welfare, shouting: 'What about the cat?'

Bradley's mother, Lorraine Gander, hailed the work of firefighters after they spent nearly two and a half hours rescuing him.

The 31-year-old said: 'He said he was going to the shop and then two minutes later the neighbour who lives up the road came round saying 'Bradley is up a tree'.

'He was 40ft up a skinny and flimsy tree - every time he tried to climb down the branches would snap.

'We said 'what are you doing up a tree' and he said he had heard a cat.

'People had gathered around the tree and they were all scared for Bradley.

'He loves animals and obviously saw that the cat was distressed and tried to help it.'

West Sussex Fire and Rescue Service (WSFRS) initially attended with ladders but could not prop them up as the tree was too unstable.

The crew used rope rescue units to retrieve Bradley and Tilly - who was brought down two hours after Bradley when a firefighter managed to grab her from the branches and return her to her owner.

They then drafted in another team from East Sussex with a cherry-picker, but they could not get close enough.

In the end the team from WSFRS used rope rescue units to retrieve Bradley and Tilly - who was brought down two hours after Bradley when the crew managed to grab her from the branches and return her to her owner.

At the same time elsewhere in the county, East Sussex Firefighters were looking for a cat trapped beneath floorboards in Hove and were saving a squirrel stuck up a telegraph pole in Brighton.

'I was shocked he had managed to climb that high, it was only a thin tree,' said Ms Gander, a full-time mother of five.

'Everyone was relieved when he was back down and there was a big crowd.

By Lucy Croswell for MailOnline