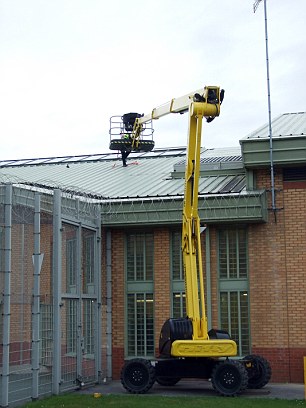 Prison has so many packages of drugs hurled over its wall that wardens bring in cherry picker to clear them from roof.

The amount of drugs being thrown over the fence into one prison is so high that warders have been forced to deploy a cherry picker to remove them.

Packages containing heroin and cannabis were cleared from the roof of HMP Altcourse in Liverpool - hurled there from the outside by friends of inmates who missed their intended targets.

The hydraulic crane also recovered so-called 'legal highs' as well as 22 phones, three Sim cards and six chargers from the 60ft roof, contained in a total of 14 bubble-wrapped packages.

Officers at the jail, privately run by controversial firm G4S, disclosed the haul in an internal document, which dramatically highlights the extent of drug use among the jail's 1,300 inmates.

Dave Thompson, director of the Category B prison, said: 'These items were thrown over the prison walls by criminals on the outside and it required a cherry picker and staff to retrieve them from inaccessible rooftops.'

Altcourse, the first prison in the UK to be designed and constructed for a private operator, has been criticised for drug-related violence.

After a three-day visit last June, chief inspector of prisons Chris Hardwick wrote: 'There have been 38 serious assaults in just four months before the inspection. Gang issues and the availability of drugs, particularly new psychoactive substances [legal highs] were a significant factor in much of the violence.'

G4S insists that Altcourse runs an effective anti-smuggling operation, and that the cherry picker is part of a 'high-visibility' approach to show inmates they will 'root out packages from anywhere'.

'We are committed to preventing drugs coming into our prison and we are encouraged that, at the same time as our seizures of banned substances have increased, the numbers of prisoners testing positive for them has come down,' said Mr Thompson.

By Andy Gardner from The Mail on Sunday.