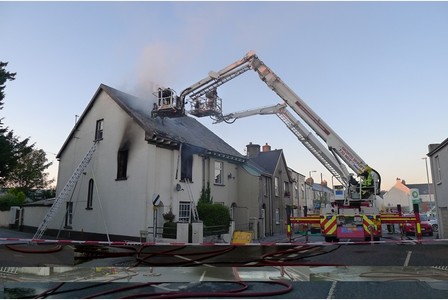 THE manager of Torrington Fire Station said the community should be commended for showing the "Torritonian spirit" by rallying round the Mitchell family left homeless by a devastating fire last night.

Firefighter Graham Rooke, who was also the incident manager for the blaze in Calf Street, also praised the crew of more than 30 fire service staff for "working extremely well to stop the fire spreading to neighbouring properties".

The large family who lived at the house got out safely - although a woman was taken to hospital for smoke inhalation - but are unable to return as it is badly smoke logged, while the first floor bedroom and room above are 100% damaged.

But firefighters did perform a heroic rescue of three beloved family pets – two hamsters and a tortoise, said Mr Rooke.

The firefighter said: "We have been receiving good wishes for the family from local people, and the community have on Facebook.

"That shows the Torritonian spirit, that they will pull together to help people in their time of need. They should be commended.

"I would also like to take the opportunity to thank to the crews, they worked extremely well to stop the fire spreading to neighbouring properties – it was an end of terrace building."

A member of the family found the fire, which it is believed began in the first floor bedroom. The cause is currently being investigated.

Mr Rooke shared the above pictures which show firefighters using elevated work platforms or 'cherry pickers' to get at the last of the flames. He said it was "unusual to have two cherry pickers out at the same time".

The fire was already well established on the first floor by the time crews arrived, and quickly spread to the roof space. Tiles had to be removed from the roof to get at the flames.

The house had working smoke detectors which helped and are vital equipment for all properties, said Mr Rooke.

Five fire appliances and more than 30 staff worked to put out the fire and contain it.

A donation page has now been set up by friends to support the Mitchell family, who were the victims of the fire. For more information and to help by donating, visit: https://www.facebook.com/groups/489145837928975/

By NDJJosephW for North Devon Journal